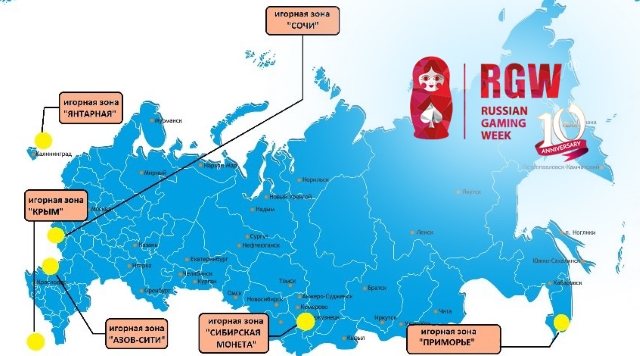 Since 2007, gambling venues beyond special zones have been outlawed. Gambling zones have been established in the Altai, Primorye, and the Kaliningrad Region as well as at the boarder of the Krasnodar Territory and the Rostov Region.

The first of them was Azov City, situated between Rostov-on-Don and Krasnodar. Now there are three casinos operating here: Oracle, Shambala and Nirvana. In spite of its earliest start, Azov City can’t be called the most successful primarily because it’s only got 2.5 years to operate. The fact is that in 2014 the federal center decided to adjust Olympic cites to casinos. But due to the law prohibiting gambling business regulation of two gambling zone in one region, efforts were made immediately to close down Azov City.

This issue has been resolved only recently after adopting amendments allowing gambling zones neighborhood on Kuban and prohibiting the liquidation of such zones in the first decade of their existence. Thus, the problem area will exist till January 1, 2019, allowing residents to refund their invested billions.

The second gambling zone – Primorye near Vladivostok – has extensive plans for future. Only one casino, Tigre de Cristal, operates here yet. It was established in early November previous year. Its owners obtain good profit.
Recently, one more gambling zone, Yantarnaya, started hosting visitors. It is situated on the Baltic Sea cost in the Kaliningrad Region. Neverland company establish the Magic Crystal slot hall here. The construction of other sites is in progress now and the amount of gambling venues is going to increase.

The Altai gambling zone is called Siberian Coin. Last year, its only casino, Altai Palace, hosted 17 thousand of gamblers and contributed around 30 million rubles into the region budget.

The future of gambling zones in Russia

All operating gambling zones reveal their plans for future. Most projects are not implemented on schedule, but investors and authorities predict bright prospects.

Primorye is supposed to be the most prospective and is going to compete on a level playing field with Las Vegas and Macao. Vladimir Miklushevsky, Primorsk Territory Governor, said about growing interest from investors.

Due to its border location, Yantarnaya zone also wants to attract foreign players, in this case, Europeans. Besides mentioned-above Neverland, the resident of this zone is Royal Time Group that focuses on the integrated resort creation along with the co-investor, RTG Baltik. According to the plan, the comprehensive operation of the gambling zone will start in 2029.
The Siberian Coin is also going to expand and host thousands of guests daily.

One more gambling zone is going to appear in Sochi with Olympic sites always standing idle, and it will be an easy task to open casinos, hotels and restaurants there. Moreover, the great amount of tourists looking for entertainment will offer investors good revenue.

The activity of officials at various levels sometimes makes gambling business representatives be nervous. The Azov City liquidation story could scare potential investors away, but finally the federal center showed its positive intentions regarding gambling zones.
You will be able to examine Russian gambling zones situation more thoroughly within the RGW-2016 gambling congress on June 2-3. This event will gather all industry leaders who will answer the following questions:
• What is the future of Russian gambling?
• Is it worth investing in this industry?
You will be able to know more about gambling business regulatory in Russia, free niches for your own business development, online casino promotion tools, establish new business relations etc. You can find more information about the Russian Gaming Week program here.

While legal gambling business only starts growing, illegal venues continue succeeding. Probably, all citizens of Russian cities know about existing of such establishments and everyone can find a way to get there. Crime reports often inform about gambling rooms liquidation with police raids being conducted at the same addresses several times.

To become unnoticed illegal clubs usually keep their doors closed and let in only trusted players. New clients can enter such venues on the recommendation of acquaintances. Cash-desks try to contain little money because the punishment severity depends on the revenue. If while searching some cash is found, the owner will be likely to be quit for a fine up to a half of million rubles. Real revenue can be always hidden so as investigators won’t find them. Do not exclude corrupt practices of responsibility avoiding and shady business operating.

You will find out what measures the government applies to illegal gambling clubs from speakers at RGW exhibition-forum that will take place on June 2-3 at Sokolniki, in Moscow.